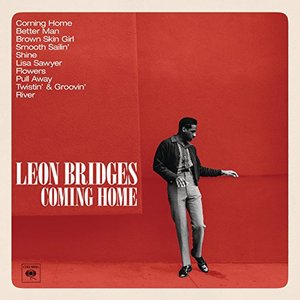 Highly anticipated 2015 debut album from Fort Worth, TX native Leon Bridges. Coming Home was produced by Austin Jenkins and Josh Block of White Denim. Bridges began writing and performing 1950s and '60s style soul music that was described by Austin 360 as a transmission straight from the heart. He began to attract followers and his break in the music industry is attributed to a run in he had at a bar with White Denim guitarist Austin Jenkins. The duo discussed clothing at the bar and a few weeks later Jenkins and bandmate Joshua Block ran into Bridges during a performance in north Texas. It was the performance of his original song Coming Home that caught the attention of Block and Jenkins. This debut includes that track and nine other originals.