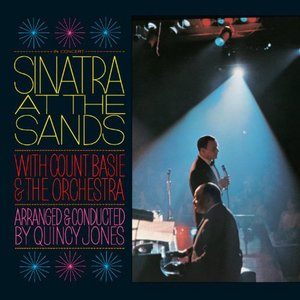 Sinatra At the Sands - Frank Sinatra

2014 re-release. in many ways, SINATRA AT THE SANDS is the definitive portrait of Frank Sinatra in the '60s. Recorded in April of 1966, AT THE SANDS is the first commercially released live Frank Sinatra album, recorded at a relaxed Las Vegas club show. for these dates at the Sands, Sinatra worked with Count Basie and his orchestra, which was conducted by Quincy Jones. Throughout the show, Sinatra is in fine voice, turning in a particularly affecting version of 'Angel Eyes.' He is also in fine humor, constantly joking with the audience and the band, as well as delivering an entertaining monologue halfway through the album. Basie and the orchestra are swinging and dynamic, inspiring a textured, dramatic, and thoroughly enjoyable performance from Sinatra.